Looking for Something?
Navigation

Ta Phin is a northeast village of Sapa, a mountainous district of Lao Cai province, Vietnam. The livelihood of local people, mostly ethnic minority groups, is underprivileged. Development of tourism in the village has caused an unfair difference among neighborhoods, bad conducts with tourists and local people, and loss of ethnic traditions. This project aims to address these issues by building a community house in a poor neighborhood of the village and raising awareness of local people as well as tourists. The ultimate goal is sustainable development of the local region with respect of cultural diversity and natural environment.

The project is put into practice by a team board (Ly May Chan – local leader, Linh Ngo – technician, and Viviana – manager), collaborators and local people themselves. The original idea is proposed by Ly May Chan based on the real needs of the community. It is therefore a community-based project. Major activities include the construction of a community house with conservation garden, showroom, training programs, and propaganda programs. The house design is carried out by a well-known Vietnamiese architect, Hoang Thuc Hao and his team the Young Professionals. This team also participates in other activities of the project in order to ensure its sustainability. All activities are implemented with the official approval from governmental office of Ta Phin, the encouragement of local people, and the collaboration with related agencies. The total project budget is $10.000.

Ta Phin is a northeast village of Sapa, a mountainous district of Lao Cai province situated in the eastern side of Hoang Lien Son range. The district is distributed on latitude from 22o07′ to 22o28’46” North and longitude from 103o43’28” to 104o04’15” East, covers on an area of 67,864 hectares, ranges on an average altitude of 1,500 m above sea level (from 200 to 3,143m). With diverse elevations, climate patterns of Sapa also range from subtropical to temperate. Average annual precipitation is 1.63 billion m3. Generally, the district could be divided into 5 ecological zones: high-mountain zone, upper wind-sheltered zone, upper wind-receiving zone, lower wind-sheltered zone, and lower wind-receiving zone. Ta Phin belongs to the upper wind-sheltered zone.

Ta Phin locates in a mountainous sloppy region with a complex topography. The central area of Ta Phin (Sa Xeng, Suoi Thau, Can Ngai) is relatively flat and large. The village is divided into three sub-topographical areas:

Ta Phin is characterized by a diverse climate type, ranging from sub-tropical to temperate, depending on the particular altitude and season. Summer is marked by cool and rainy weather, while winter is cold and frosty, occasionally snowy. Average climatic data is as below:

With low average temperature and high precipitation, Ta Phin is suitable for growing temperate and sub-tropical crops such as apricot, plum, pear, peaches, various flower and medicinal plants. However, frost in winter and fire in dry season also damage cropping systems as well as forests, and result in loss of plant resources. Residence of ethnic groups like Dao and H’mong, furthermore, makes this village become an attractive site for tourism and research. 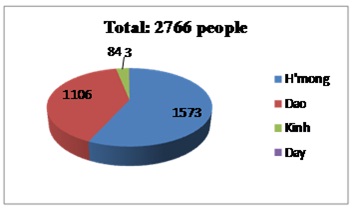 Major income activities of residents in Ta Phin are agriculture, forestry and tourism. Agriculture is mostly subsistent, cultivating local varieties with low productivity. Major crops are rice and temperate vegetables. Rotation and cultivation technologies have not been applied. Forestry profits rely on few plants such as cardamom, orchids, and medicinal plants. Tourism activities, though provide a good source of income, are seasonal. Available services and products for tourists are the herbal bath, medicinal plants, traditional handicrafts and brocades, and home-stay.

Ta Phin locates in a mountainous area within one of the poorest province of Vietnam (Laocai). Local population is mostly ethnic minority groups whose living conditions are underprivileged. With the development of tourism in recent years, the living standard of this village is increasing. However, this development only concentrates at a very central area, thus results in a significant difference between this area and other neighborhoods within the village.

Tourism also provokes a bad routine of local people: chasing tourists to persuade them to buy local products. This routine creates an unattractive image of the local people, and reduces the interest of tourists in the village.

Along with the recent modernization and life improvement in certain areas, an inadequate awareness and respect of ethnic minority groups could be recognized. This issue is expressed by several signs: (i) Dao, H’mong and ethnic people imitate the lifestyle of Kinh people#, (ii) young generations of ethnic people are not well aware of their unique traditions, and (iii) the indigenous knowledge of ethnic groups is being lost. To quickly escape from poverty, local people are adversely modifying their customs and living environment. Deforestation and over-exploitation of high-value plants are instant examples. In Ta Phin, these negative modifications are significant since they are tightly connected to cultural and biological resource conservation.

Educational intervention: local people are educated to raise their awareness of traditional values and to develop their skills. The acquired knowledge and skills would improve the manners and behaviors of local people with their own cultures, tourists, and environment.
Economic intervention: extra income sources are provided from exhibition activities, selling products without chasing tourists, and sustainable cultivation and harvest of plants.
Social intervention: propaganda and discussions are organized to raise the understanding of local people about values of cultural and natural resources.

This project is proposed by a board team, collaborators and local people in Ta Phin:

The ultimate goal of this project is to improve the livelihood of local people in Ta Phin and conserve the indigenous plants of the area.

Beneficiaries of the project are the local population in Ta Phin, tourists who are interested in the village, tourism agencies, and other related groups of people

Activity reports, financial records and survey reviews are summarized, documented and sent to donators and partners every three months.

I am a passionate woman who follows her dreams. My strong personality and sensitivity is a reflection of the soul of this project. I arrived in Vietnam in October 2010 for a voluntary period, looking for a balance in my life, I just realized how important is the ethical and sustainable meanings in life, people and work.
Read More »